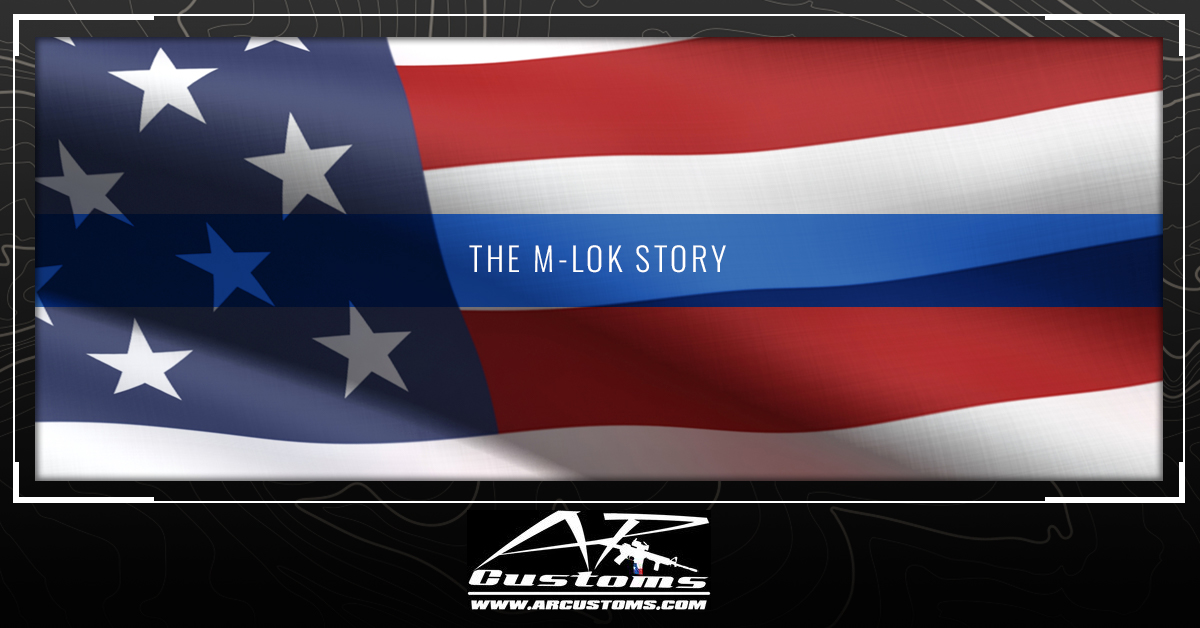 For decades now, the Picatinny rail system has been the standard for ARs and their accessories. But all good things must come to an end, and with the expansion of the AR-15 market in the civilian sector, private manufacturers have created their own rail systems to compete with or even replace the venerable Picatinny system. In recent years, there has been one system that has gained notoriety and prominence in the firearms field; the M-LOK rail system. For those looking to customize their AR-15, the M-LOK system may be the perfect new handguard to add to your rifle. AR Customs will explore the history and use of this versatile new rail system.

The Origins Of M-LOK

Designed by Magpul in 2007, the M-LOK system can trace it’s origins to the Masada Concept Rifle. On the handguard of the rifle were three slots that accessories could be mounted to. A few years later, the company released their line of MOE handguards that used the same slot system. In 2014, Magpul furthered refined their slotted rail system to release the M-LOK system. M-LOK stands for Modular Lock.

The Picatinny rail system relied on a series of slots and ridges by which accessories can be mounted. While the system is effective, proven by its decades of use in militaries and polices forces across the world, the system is inherently heavy and bulky, and new handguards can have sharp edges that can cut the operator. The goal of the M-LOK system was to reduce the profile of the handguard, make it lighter in weight, and provide more opportunities to mount accessories.

To accomplish this, Magpul created a handguard system that makes use of rectangular cutouts. Accessories can be attached to the handguard by using the t-shaped lugs on the bottom of the accessory. The lugs are slotted into the cutout and then tightened with an Allen key. Because the cutouts are rectangular, the accessory can be shifted forward or backward in the slot to meet the user’s preferences. The benefit of this system is that accessories can be quickly mounted or removed to a handguard, making it ideal for those looking to change out accessories throughout their day at the range.

In early 2017, it was announced that the Naval Surface Warfare Center was running trials with a variety of modular rail systems, likely looking for a replacement for the aging Picatinny system. The trials tested each rail system’s ability to mount and remove an accessory and maintain it’s zero. It also tested the durability of each system. The result was that M-LOK was a clear favorite, as it far exceeded the expectations of the researchers. They found that an accessory could be mounted repeatedly to the same location along the M-LOK rail and would only experience a point of aim shift of 1.3 MOA, meaning that the rail didn’t dramatically change the effectiveness of accessories like scopes, lasers, and sights. The drop tests showed that the M-LOK system retained its accessories better than other rail systems, and failed only at loads that were much higher than it’s competitors.

The popularity and practicality of the M-LOK rail system means that custom parts and accessories for it have proliferated. You can find much-needed accessories like grips, scope mounts, RailScales, and even rail covers for your M-LOK handguards. Each of these accessories fit the needs of the operator and enhance the usability of the rifle in some way.

If you’re looking to customize your AR-15 and M-LOK handguard, you can find an incredible assortment of custom rail covers, attachments, and parts at AR Customs. Order your custom M-LOK handguard accessories today.